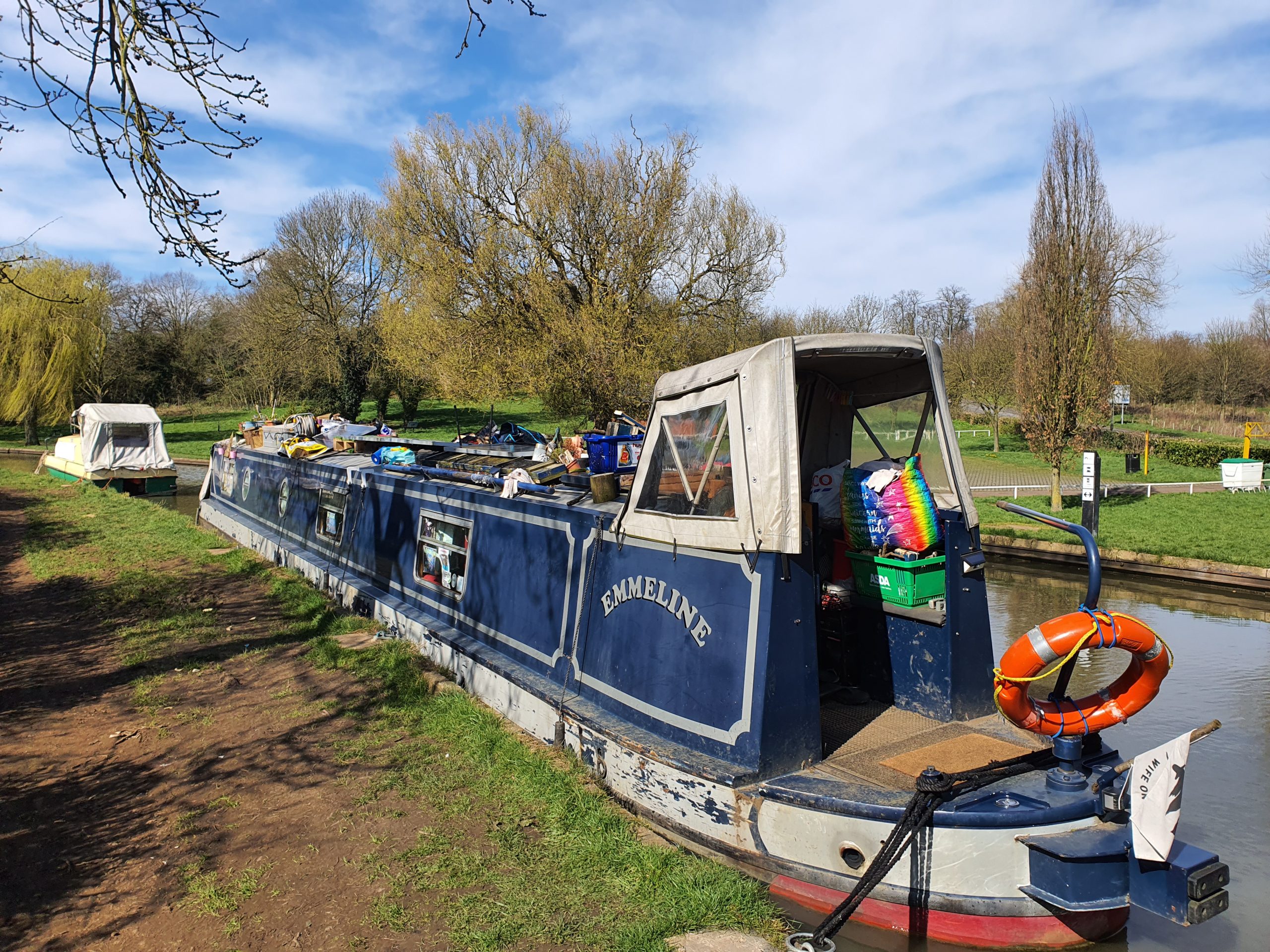 Time to move on from the Boathouse. The now very tidy roof is covered with as much wood as we can safely load onto it and were ready to go.

Last night – to our shock – The Boathouse was packed!  We were in there earlier on that day – and there was 3 families in there, us, and those from 2 other boats that were moored here – when the news came in that Boris had stated that pubs, clubs etc should close from tonight. Needless to say – it caused a bit of a ruffle in there with the staff – but (at that time) there was really no one there.  Anna popped back in there later that evening to let Glen know we were moving on Saturday – and to thank him for the wood etc – to find the place heaving!  Seems everyone is on one last bender before the pubs close – you really don’t know what you have until you don’t have it (or allowed to have it) anymore!

Set of after a bit of a lie in..   only expecting to be moving for 4 hours today to get to Newbold – but the first stop is the water point – as the water tank is empty (or near enough!).  An hour later – it was empty! – we got going and whilst its dry – it’s rather windy, and I hate moving when its like this..   honestly – I think I’d rather have it raining than being windy!.

Onward past Dunchurch Pools Marina – a little bit filler than the last time through – the first pound was virtually empty then – but not now! 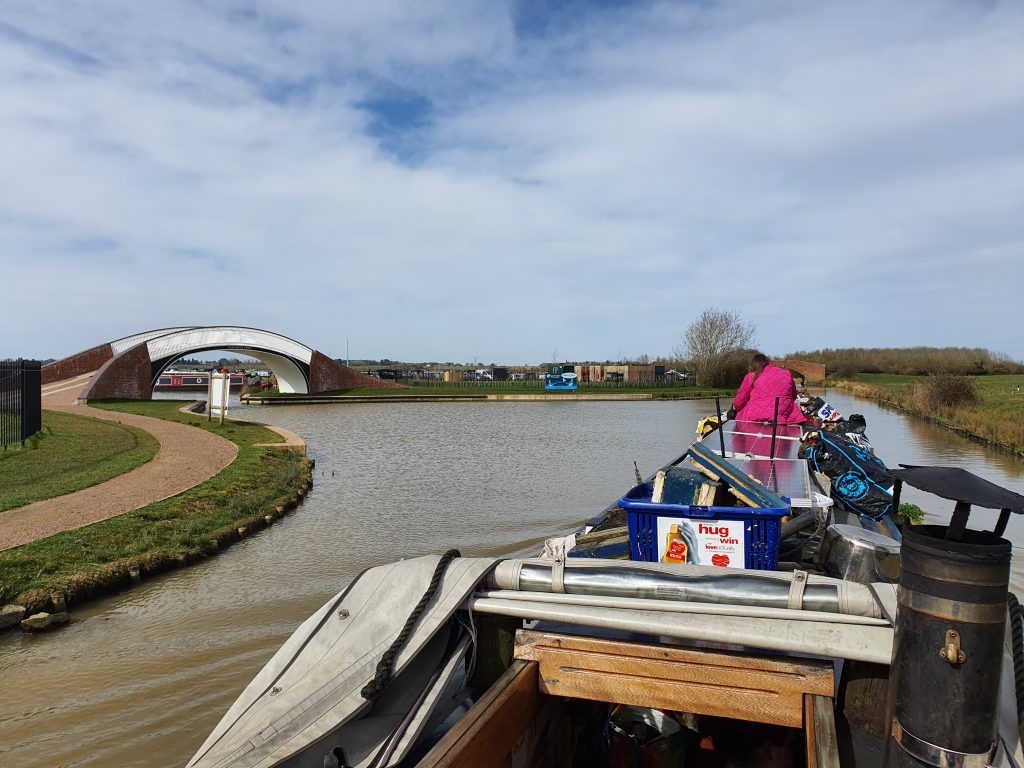 And onto Barby moorings where were going to get a pump out and a tank of diesel..  hopefully.. if with this side wind we can actually get into the place!

Half way through fighting the wind to pull in..  a boat coming out – fantastic!..  so its in reverse, try to pull out again – after 5 minutes.. he’s out and gone and we can pull in again!..

Now – I understand this social distancing – and expected something – and as expected get near to the office, but not too close..  and do things slightly backwards..  fill in the paperwork – sign it (as this is the bit I need to do).. walk back to the services berth and then one of the staff arrive to do the pump out and the diesel.  Filling the tank was a bit of a faff..  the hose on the pump was too short to reach the back of the boat – so we had to pull it diagonally across the pound to get the stern closer..  and pull it back again once done!     So – tanks all done – time to pay – which was done using the card, over a phone back to the lady in the office who already has the paperwork signed – just awaiting the value to put on it!

I’m also trying something at the moment – we do have two tanks on Emmeline – so the changes announced by the chancellor will have an impact – but for now..  were switching tanks before we move, and after we stop.. so fuel from one is used to run the engine when not moving to charge the batteries and the diesel heater (at that time also)..   and when we move – swap over to the other tank – then swap back again when we pull in once more.

Yes, this is also a bit of a faff..  as whilst we have two tanks – both feed the same first primary fuel filter.. from there, it splits to the diesel heater and the engine..  so to use one tank for one and one for the other – without installing a load of new pipework – we need to turn off the taps to one tank to use the other – this is the only way we can find out just how this could affect us – as when these changes come into force.. we may need to declare one tank at 100% domestic (no duty) and the other at 100% propulsion (full duty)..  instead of currently where we declare 60%/40% regardless of which tank it goes in.

Now.. getting out was a pain in the backside!   With this side wind – it was continually pinning us to the berth – and we cant pull away from the edge, to turn the boat to then get out of the small marina entrance.  Tried once.. gave up – time to drag the boat out – it should be safer..    With Dawson on the bow.. me at the stern, Celeste at the controls we managed to get the boat pulled backwards out of the marina, turn and were away again (all without leaving Dawson behind..  ) 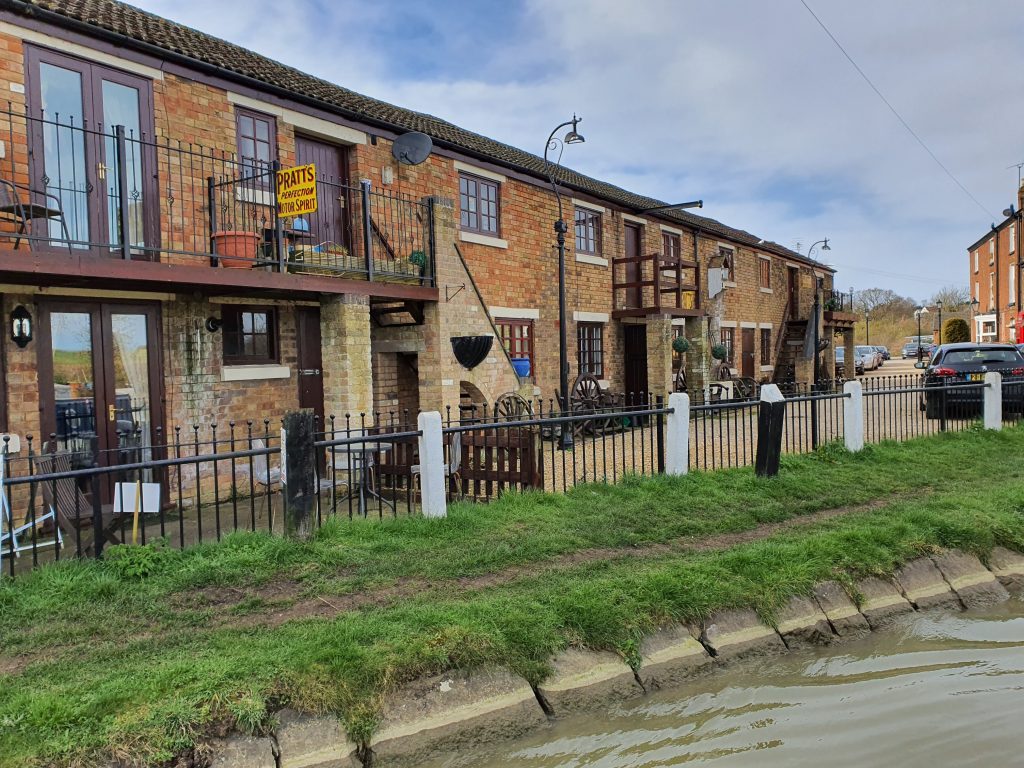 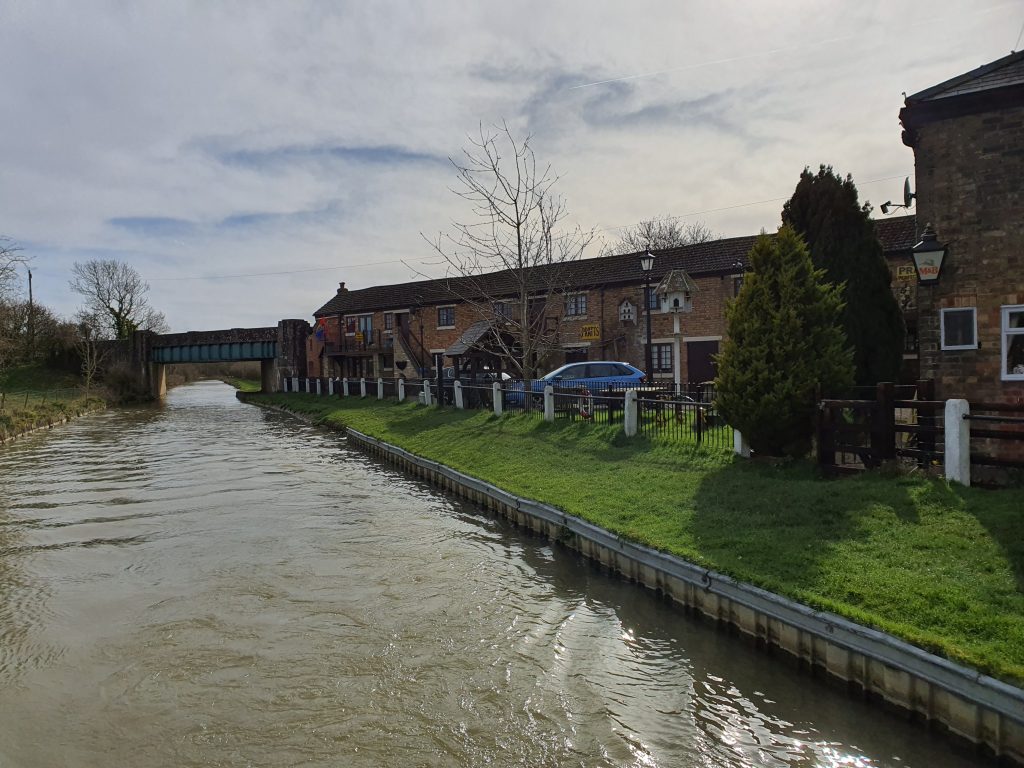 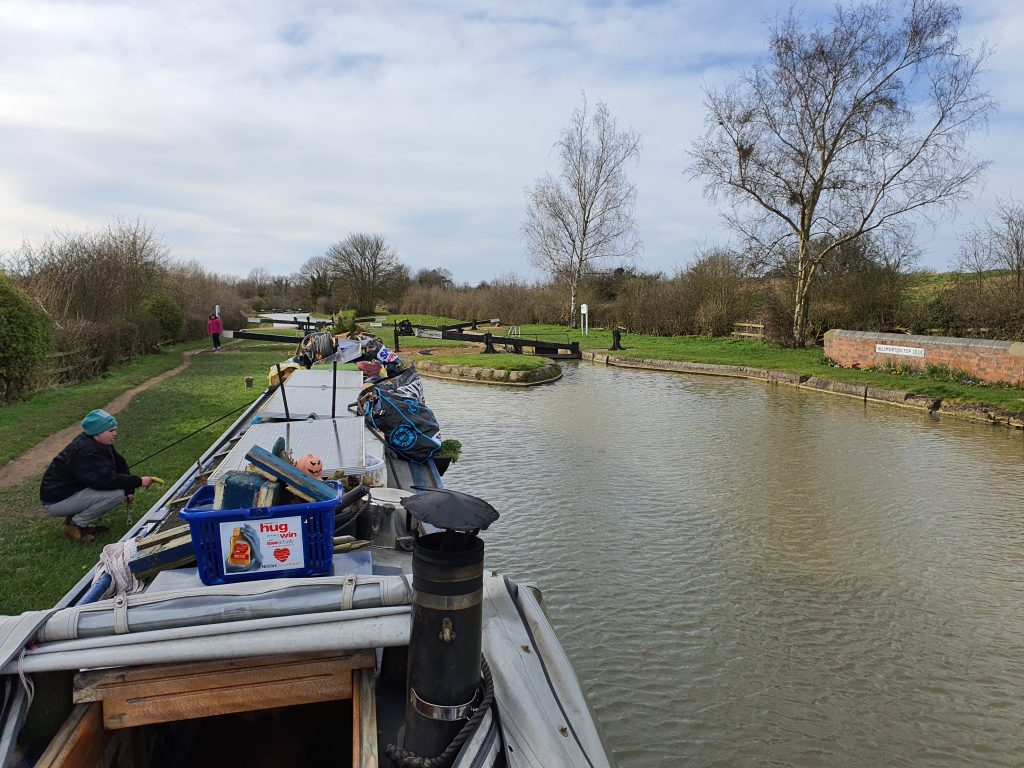 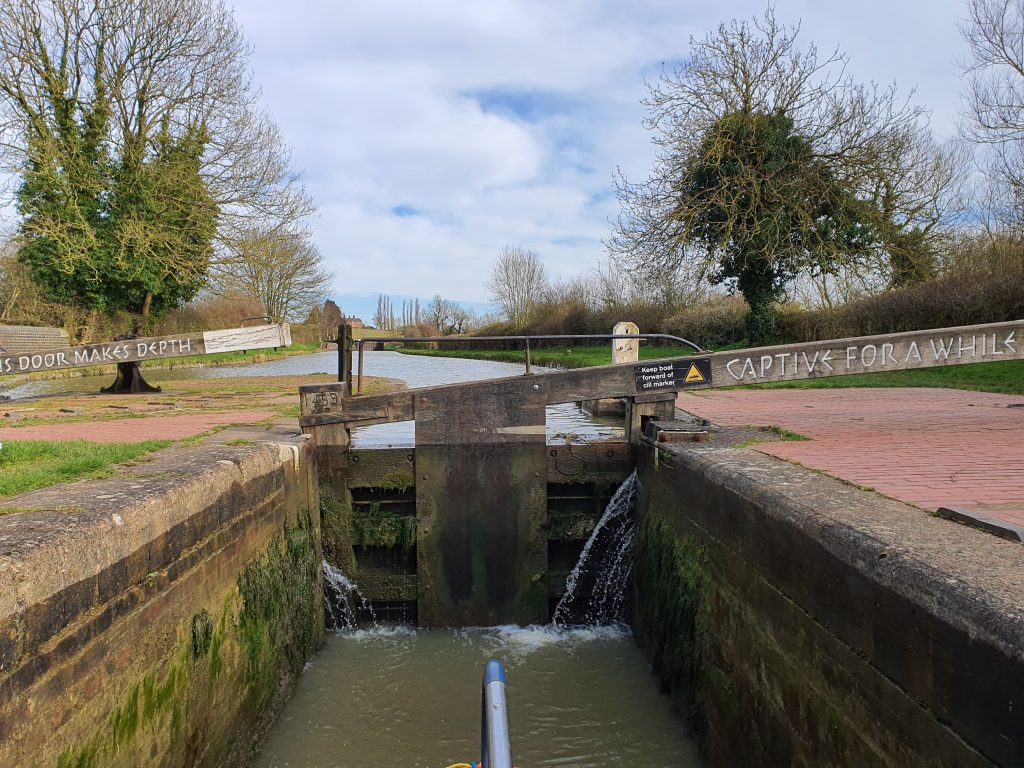 Under the now finally completed Link Road bridge (didn’t get a photo)..   but last time through there were “Stop/Go” boards out when they were working in the water, or lifting things over it..

And onto our mooring for tonight.  It’s been a tiring day – with the wind not helping as steering a boat sideways to keep in a straight line, and not crash into those coming the other way or boats that are moored. We didn’t quite get to Newbold – as Anna’s gone to Tesco’s (as the supermarket is only 5 mins walk from here), and by the time she gets back it will be getting dark..