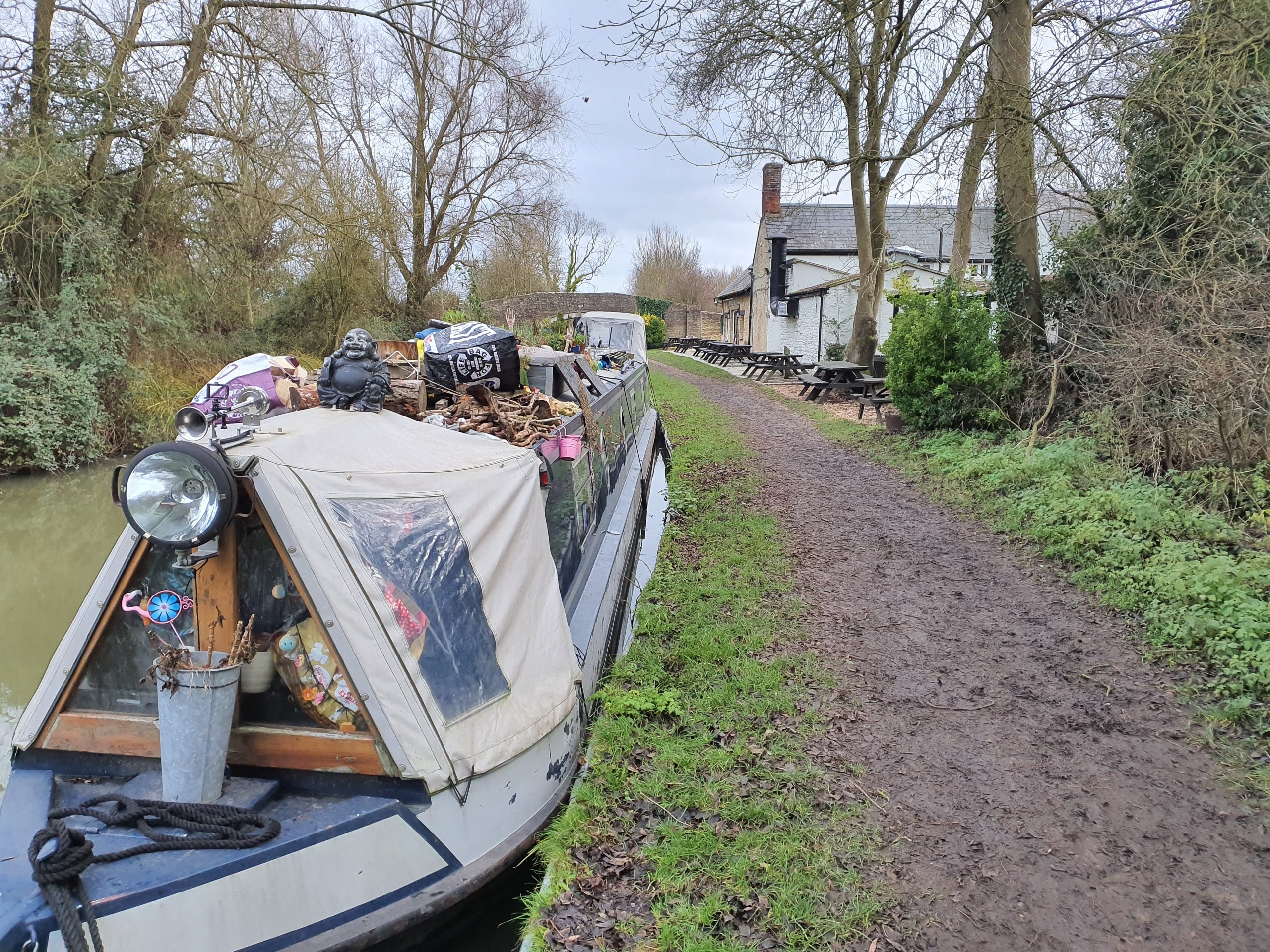 Time to move on – even though the toilets stuffed..   it would be better to move now whilst the weathers dry and be somewhere with easy access to a car (incase I need spares) than fix it today and move tomorrow in the rain..  so were moving now and sort the loo tomorrow. 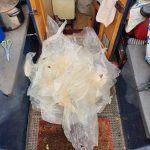 Not 10 seconds after setting off, the engine coughed and nearly stalled..  with the usual “There’s something round the prop sound” coming from the gearbox..  reverse did nothing – forward did nothing.. both tried to stall the engine so were well and truly jammed up!..  and we have no propulsion in any direction, mid stream and drifting with no way to get back to the bank (other than wading!).

Thankfully, just as I realised this, I spotted two people walking down the towpath and asked if I threw them a rope – could they pull us back in..  just enough for me to get off and do the rest with the centre line..   this they agreed to and did – so were tied up again in the exact place we set off from!

Off with the engine boards and the weed-hatch – to find part of a tarpaulin sticking up at me..   This was a sod to get out, and some had to be cut and pushed back under the boat hoping that it would pop up outside the boat..   Thankfully after 10 minutes, 30ft of plastic had been removed, the prop shaft was checked..  king nut still there and split pin still in place..  it was clear, turned free and we could try to get moving again! 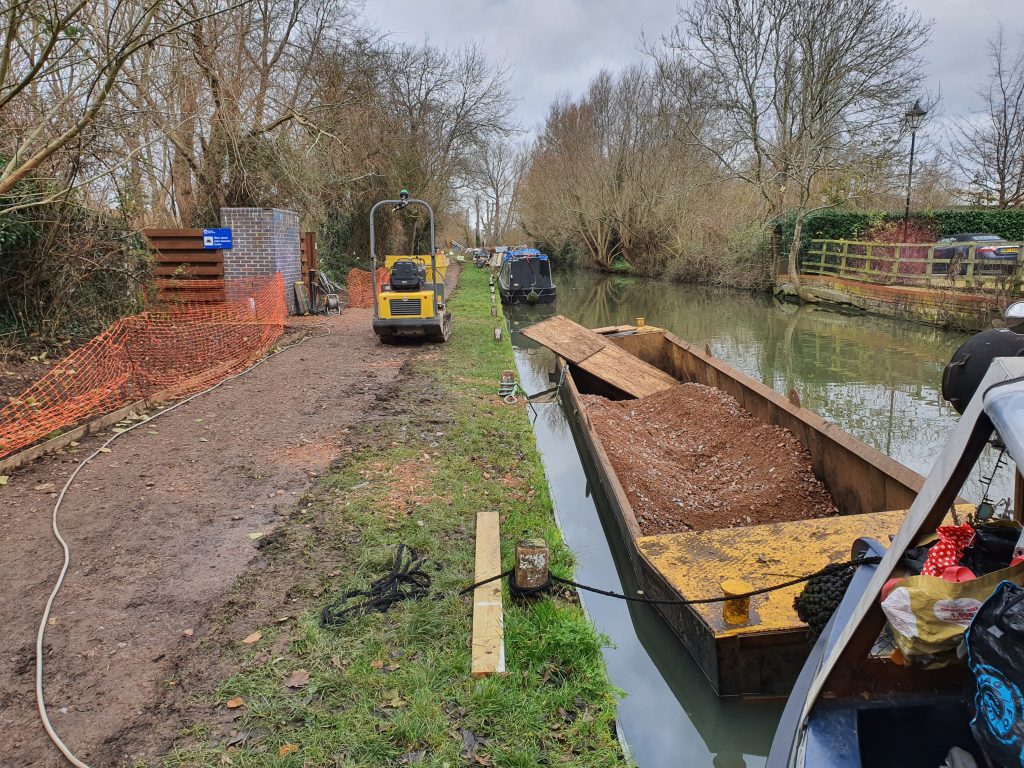 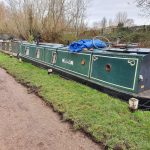 Just up from the mooring is a water point, elsan and rubbish stop – our first waypoint of the day..   But – due to the towpath being closed and re-surfaced.. the mooring is closed also.. and on the landing for the water point.. a CRT dredger and another boat – the only bit of landing left was 20ft..  not quite enough for a 62ft boat..  but enough to get the bow in, bow and centre lines on – and a gang-plank to get off at the stern!

So yea..  thanks CRT and “Lotus”..  I’m sure someone will return you the favour one day..

Eventually, the porta-loo was emptied (so that we have something until I get the toilet sorted) – water tank full (even though the pump most of the time needs a kick to wake up the pressure switch).. rubbish (and plastic!) in the bin..   and we can get going onto Thrupp.

Now..  I had thought to originally stop at Kidlington – but we will risk going past there and onto Thrupp..  Hopefully, this time of year, the mooring outside the pub should be fairly empty (it was last winter!)

It looks like “Muddy Waters” has found a winter spot..   pretty sure this was moored above Abingdon lock on the Thames in July..

Four locks on and were though Kidlington..

There was a spot before the pub – that we pulled into just in case the mooring there was full – had a wander to see if there was space, and there was just enough room for us to squeeze in – got the boat moving again, pulled in outside the Jolly Boatman and settled down – it’s a bit muddy here.. but its winter after all!

The cheese boat is here also, so if we needed cheese Grommit.. were sorted! 😀

It states that this is a 2 day mooring, but the map I have states 2 days in summer, 7 in winter – so I’m going with 7 days..  if the Cheese boat and the others around us move on Monday..  I’ll know its a 2 day mooring.. if there still here..  I’m staying too… 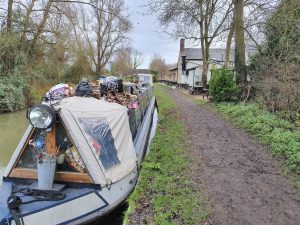 And – looking at the journey today..  we did more miles today.. than we did for the WHOLE OF NOVEMBER!   😀

Update 08/12 : The toilets sorted..   4 hours of stripping down, cleaning, cleaning, cleaning and re-assembly revealed a mass of kitchen roll had managed to be put down there..  and with the toilet being out of action for weeks whilst on the Thames it has solidified into a mass that was solid enough to jam the impeller of the macerator!

I hate stripping this thing down – not only did I have to cut off one of the screws to get the toilet out.. with the damp they had rusted to the point of rounding off the heads or shearing them off half way down the thread..  I’m thankful that I have a battery “dremmel” on-board for just the occasion with the right attachments!

But..  4 new screws.. replacement plastic collars for the screws to hold onto the ceramic so it doesn’t get chipped made from some old plasterboard wall-plugs I had left over from the house and were operational again!