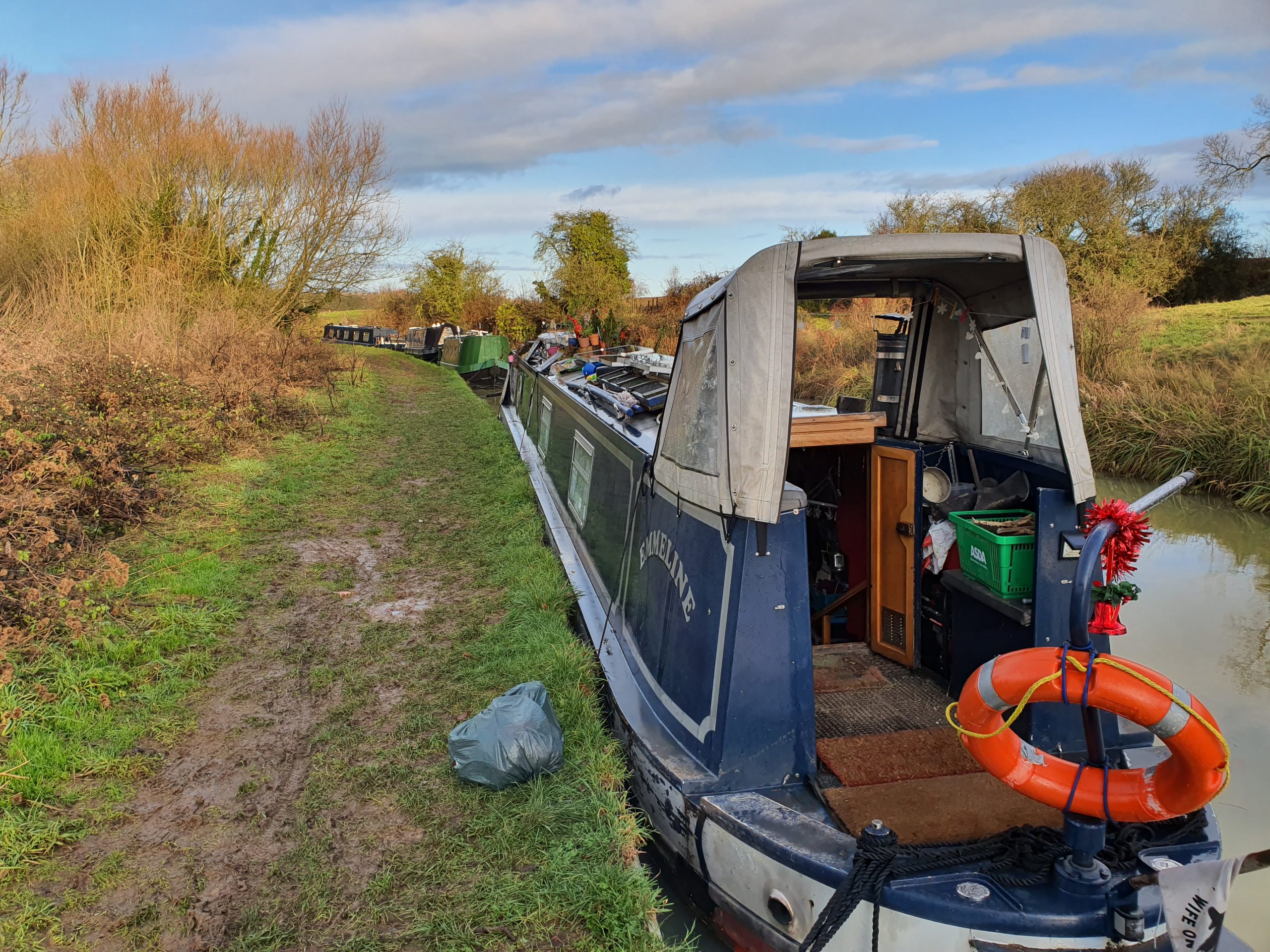 Its the weekend and time to “try” to get to Banbury..   With luck, and the shortening daylight hours, we should be able to get there on Sunday.  And hopefully this rain will stop soon!

After getting an escapee “Luna” back on the boat – were good to get going.

First stop – Thrupp Canal Cruising Club services..   A full water tank and an empty toilet tank later – were good to get going. Just outside of Thrupp is the first of the two River Cherwell stretches that we need to do. 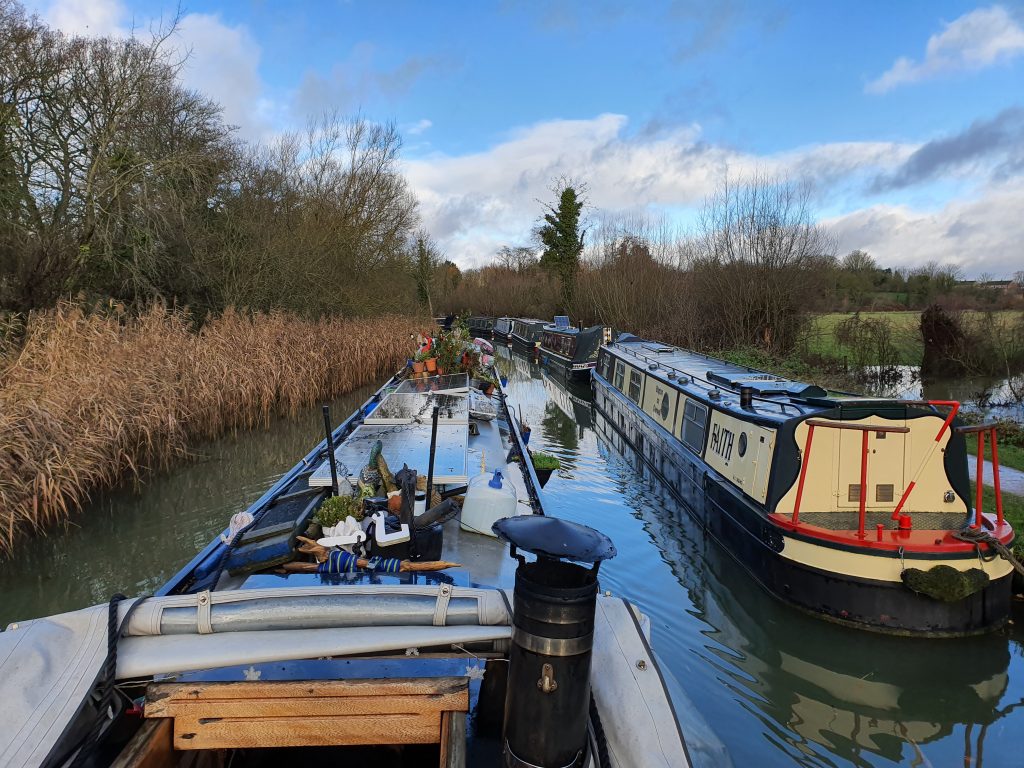 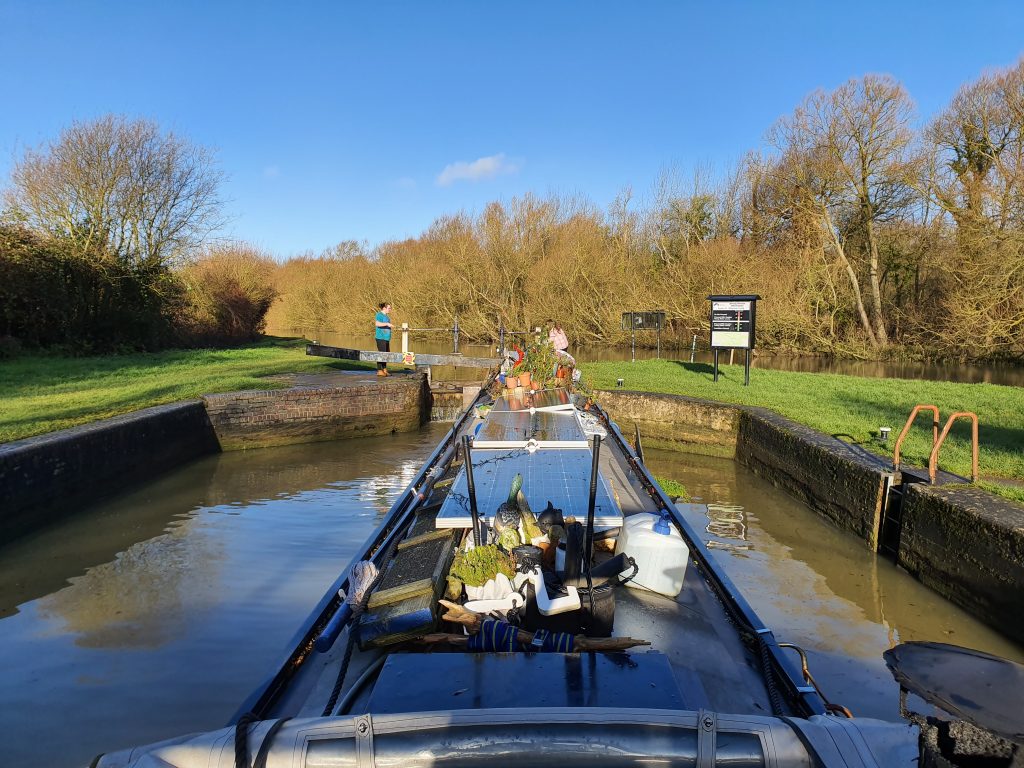 Arrived Shipton Weir Lock (its a weird one this..  Hexagonal locks wide enough for 3 boats – but a pain when you are on your own in them!) to find a make-shift “Strong stream warning” taped to the lock gate, with the level indicator on “Proceed with Caution.. Falling Water Levels”..  had a quick look, and yes, the levels are a bit high – but strong stream.. nah..  that’s a mil pond compared to the Thames!  So were good.

After a gentle cruise along the river, up through Bakers Lock (where a couple of years ago we got stuck..   looking back..  and what we have been through with the Thames.. why were we worried about it back then 🙂  ) 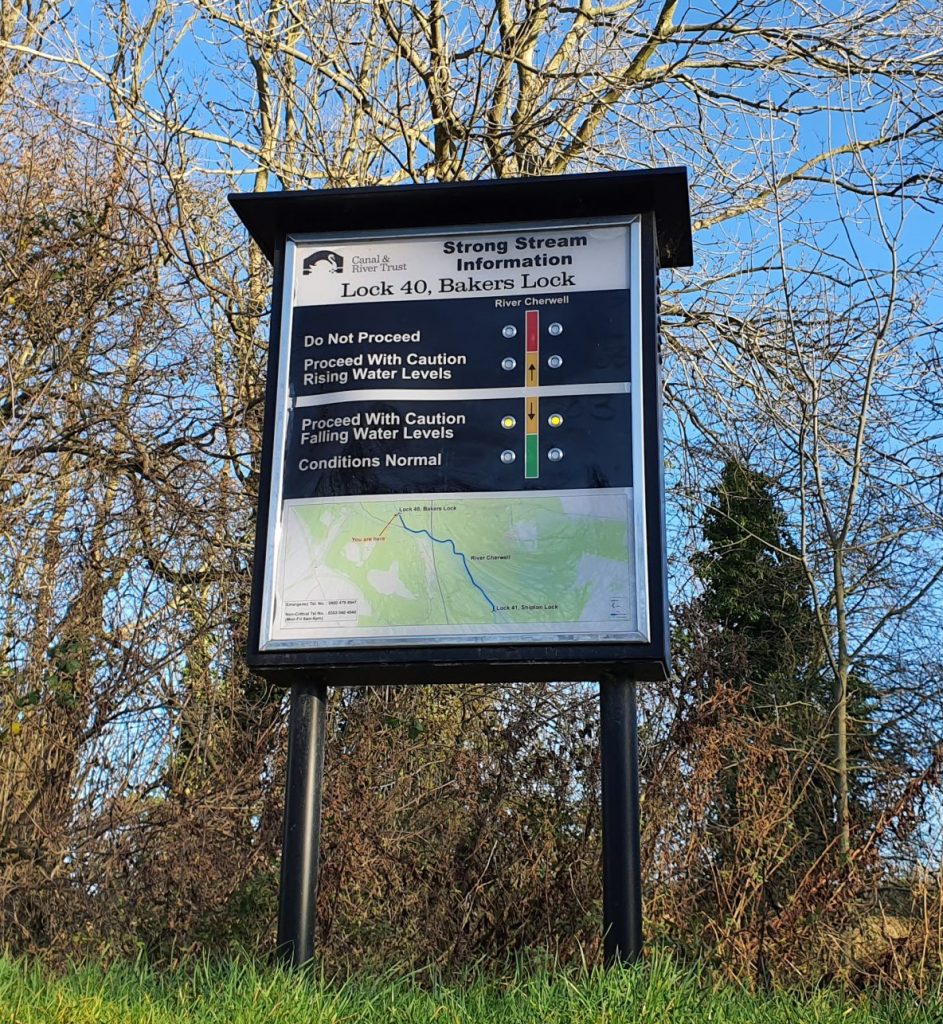 And on past more residential moorings.. and the Whitehill Satellite Earth Station..

More Locks..   And through Dashwoods Lock 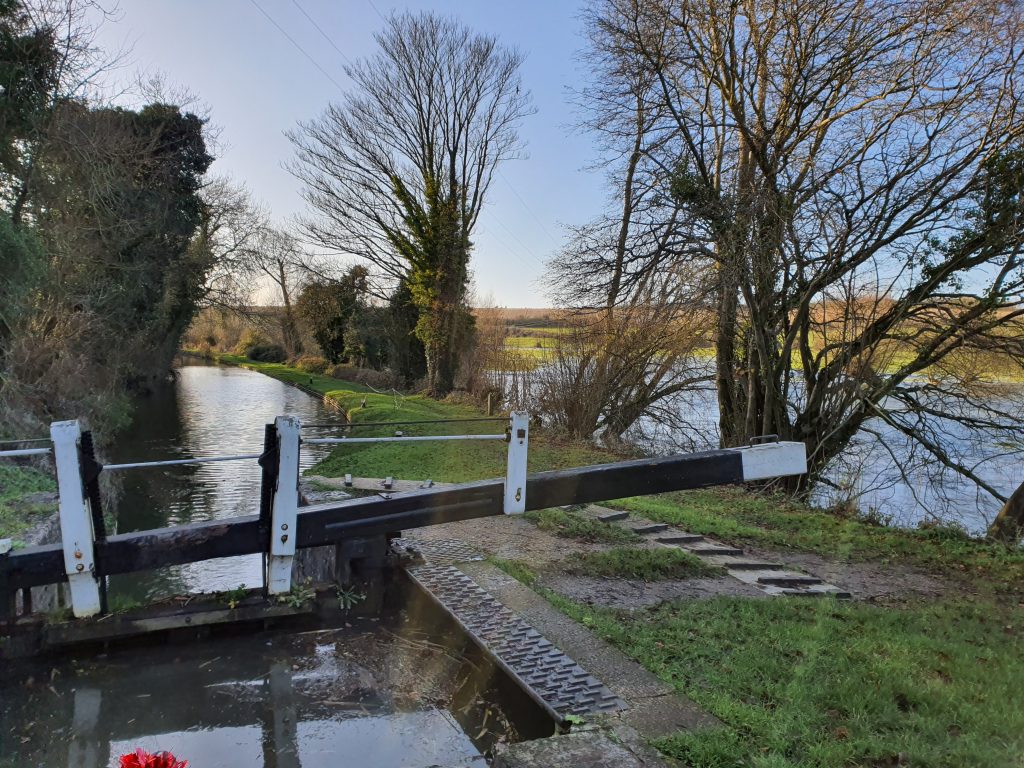 After the usual 5 a breast hire boats waiting for next season at the hire base in Lower Heyford..  more residential moorings and onto Allens Lock.   It’s starting to get dark now – so looking to moor up. Didn’t quite get as far as hoped – the stop for water and pump out saw to that – but there you go…

Did think about stopping below Allens lock in Upper Heyford – but no way..   the fields are flooded to the point that the fields are topping over the tow path – with the flood water at a higher level than the canal! – that to me doesn’t look like the bank will last long if it gets undermined – so were not stopping here. I don’t want to be in an area the breaches

Where does the canal end and the fields begin ??? 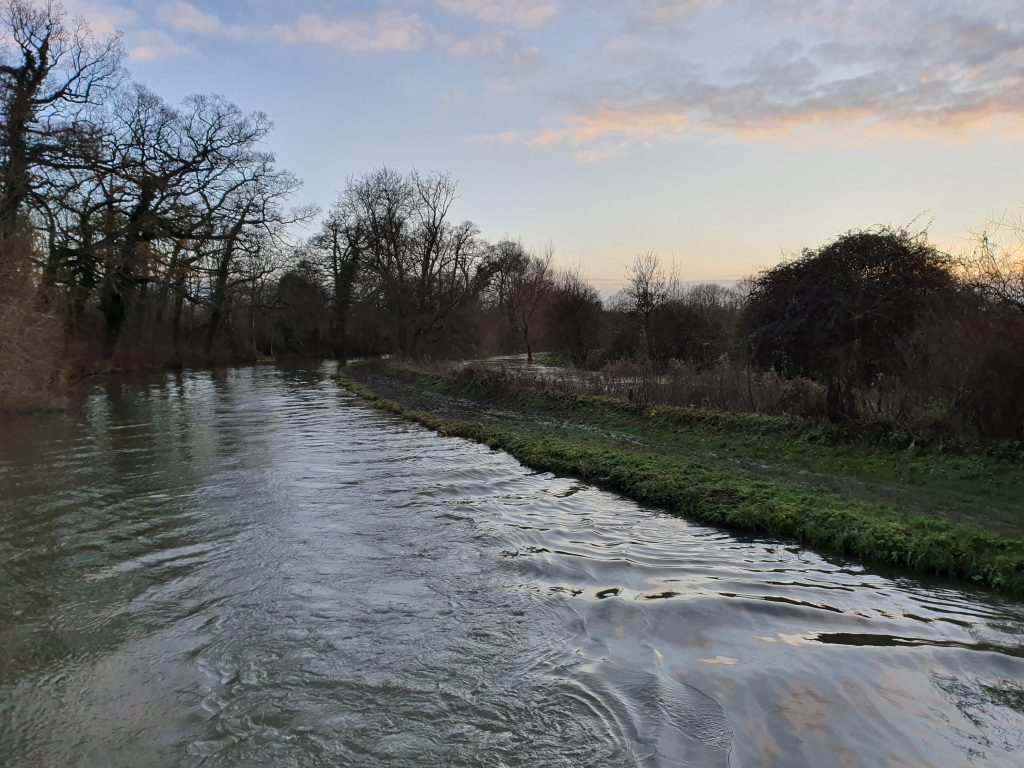 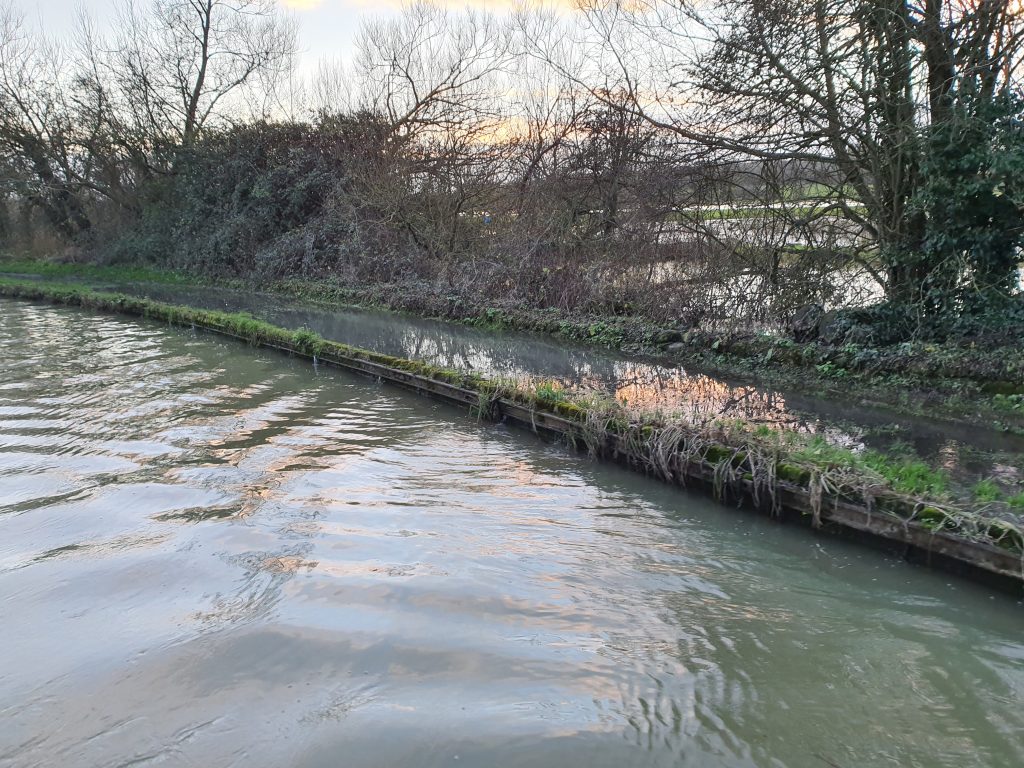 I hate Allens lock – its got an outflow right on the approach to the bridge immediately in front of the lock gates..   and no matter how many times I have tried to get into this blasted lock without hitting the walls..  no..  bang.. twist.. bang..  pinball the boat into the lock..    Try again next time.

Up through Allens lock – and there is a spot at the end of the mooring there..   Were now above the flood water levels (for now) – and it’s getting really cold as the sun’s gone in.. so it’s time to pull in and call it for tonight.. light the fire and have something to eat..   heat.. food and a few more episodes of Bull..  that’ll do nicely..